We’re in the long run-up to LEATHER®’s release, and all major game elements are complete. We’re currently in a phase of playtesting and fine tuning certain aspects, and there’s one area we’re keeping a close eye on: the rise of ubermen.

We’re using the term “ubermen” to describe superhuman boxers who are so rock solid in every aspect that they dominate a weight division for match after match, year after year, destroying all aspirations of world championship glory for any boxer beneath them in the rankings. They’re not just good – they’re unrealistically good.

Because LEATHER® simulates several years of action before the player steps into the game, we have no direct control on the development of boxers within the game, as they challenge other boxers, complete training camps and participate in bouts. Ideally the rankings in each weight division should contain a gradation of talent, so there’s a feeling of difficulty progression as boxers rise through the ranks.

But in the reality of the simulation that’s not how things always go. A recent playtest produced a colourful mix of boxers. Take a look at this guy: 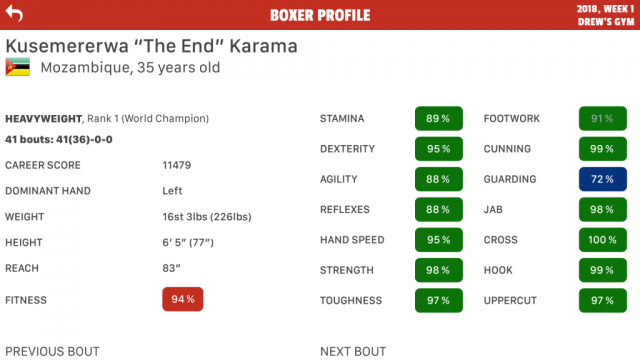 An absolute beast, no? This guy has held the world heavyweight championship crown for 14 years. Plus he’s a southpaw, adding further misery to his opponents. No one beneath him in the rankings is even close to this level. The heavyweight number 2… 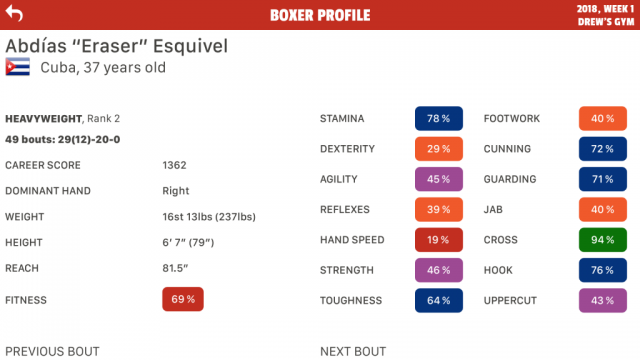 …is a solid contender, but has found himself a hostage to circumstance, and has been knocked from pillar to post by the uberman many times.

For comparison, to illustrate the different ways boxers develop, down at welterweight the world champion is an excellent boxer, but at a more realistic level: 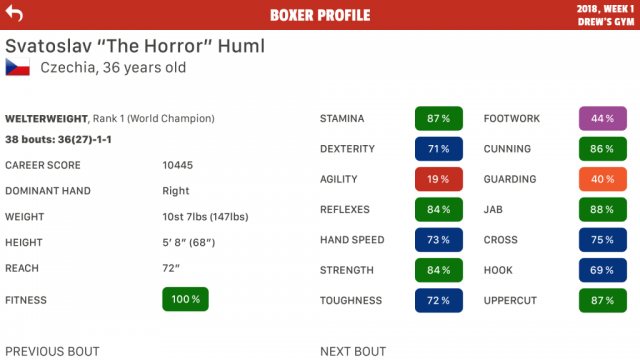 This guy is beatable; he’s not an uberman. His prospective challengers are of a similar level, producing genuinely competitive title defences. From a human player perspective you can envisage building a young prospect to give him a run for his money (if he doesn’t retire in the interim – it’ll probably take a couple of years to get a youngster into a position worthy of a title shot, and this guy would be 38 by then).

So we’re tweaking things here and there, simulating a few years of careers and combat, and checking the result. To tell you the truth we’re not dead set against the concept of ubermen; LEATHER® can equally produce absolutely abysmal paper-champions, who have had an easy route to glory and in no-way deserve their honours, and are begging to be dethroned. There’s two sides to the coin, and it may well come down to it that the ubermen are a welcome occurrence, to provide the toughest of challenges within a game of infinite possibilities.

View all posts by admin